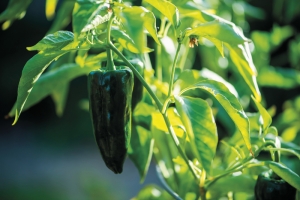 The poblano is a relatively mild chilli. Dried it is called an ancho chilli.
One of the most popular chillies grown in Mexico, the plant (of the species Capsicum annuum) is multi-stemmed and can reach 63 cm in height. The pod itself is about three to 15 cm long and about 5-7 cm wide. An immature poblano is dark purplish green in color but eventually turns so dark as to be nearly black.
It can be prepared in a number of ways, commonly including: dried, coated in whipped egg and fried, stuffed, or in sauces. It is particularly popular during the Mexican independence festivities as part of a sophisticated dish called Chillies en Nogada which incorporates green, white and red ingredients corresponding to the colors of the Mexican flag. This may be considered as one of Mexico’s most symbolic dishes by its nationals. When dried this pepper becomes a broad, flat, heart-shaped pod called an ancho chilli (meaning “wide” in Spanish), crushed and ground used for flavoring recipes.